From Allihies to Patangarh, both villages of farmers and painters…

This year, my annual trip to India took me to unexpected places. I had first thought of going to Bihar to explore the Madhubani area in search of a traditional tribal art called Mithila, or Madhubani art – I had, by chance, discovered that form of art last year in an art shop in Rishikesh, over one thousand kilometers from Madhubani – and had half-planned to include that area in my route this year…

But India always has other plans, and, if you are ready and open-minded enough to let it happen, soon you get to meet the most wonderful people and to encounter the most incredible surprises…

And so, this year my travels didn’t take me to Madhubani, but my art searches were well rewarded as I discovered another form of tribal art which I fell in love with instantly: the Gond art…

It all started on the side of the road, in a nice small historical town called Orchha, in Madhya Pradesh.

On the way to the old fort, a woman was sitting there on the ground, with paper, canvas, brushes and pots, painting the most beautiful and colourful nature scenes. She did not speak a word of English, and my Hindi is very limited, but we clearly had something in common: the love of art…

Anchuya invited me to sit with her, offered me a chai (indian tea), and soon gave me a sheet of paper and a brush!… We shared a lovely creative time together, and I came back to sit with her every day for the next few days. 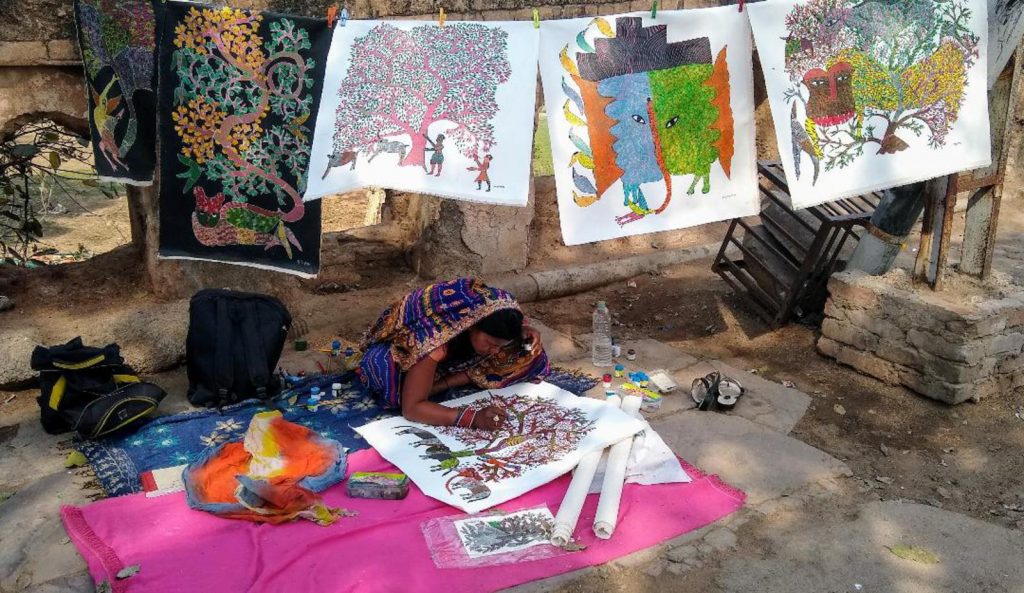 It was only when I wrote down her name and the name of her district in my notebook I realised that she was not, in fact, from around Orchha, but from an area much further away, about 700 km! 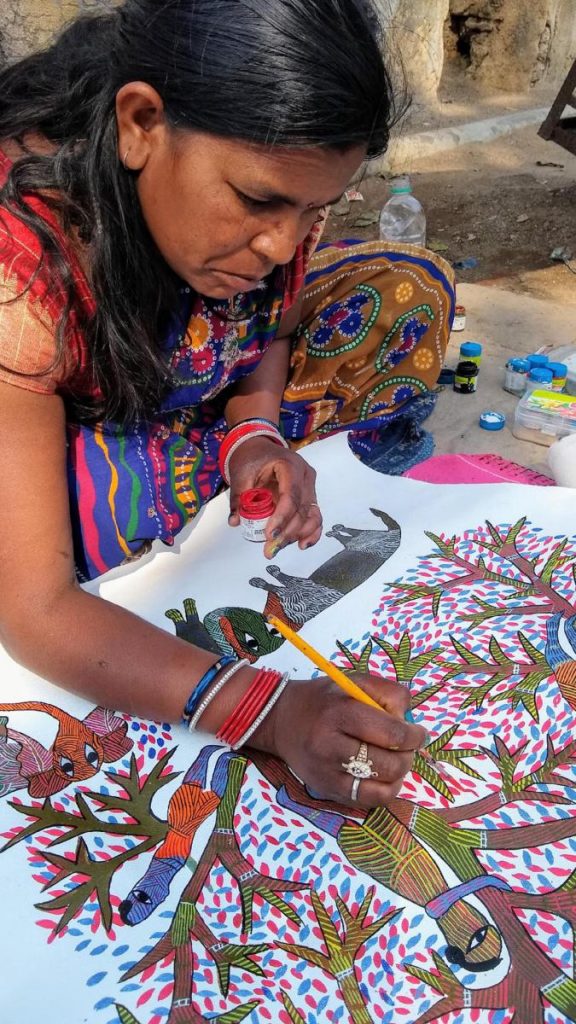 A few days later I left Orchha and went on with my travels, in a quest to discover more amazing places.

I could not stop thinking about that far away Gond area and its intriguing art; I had even started to do some research on the internet to find out more about the Gond people. I now had the name of a village, Patangarh…

On my travels while staying in an experimental organic farm, I had a great philosophical conversation with Ravi. I happened to mention my interest in the Gond art form, and he told me he had a good friend, Santosh, who knew a lot about Gond art and could even introduce me to Gond people!

From then on, I had the most extraordinary experiences, meeting lots of artists, poets, Gandhian people, driving through tiger territory, being invited everywhere with the same genuine, incredible generosity, dipping all the way into Gond art world… From a small farmhouse in the tribal village of Patangarh to the very posh house of a famous Gond artist, Mayank Singh Shyam, the son of Jangarh Singh Shyam, in the city of Bhopal; it was like travelling in a dream…

As Santosh is a journalist, he even organised, to my biggest surprise, a television interview! 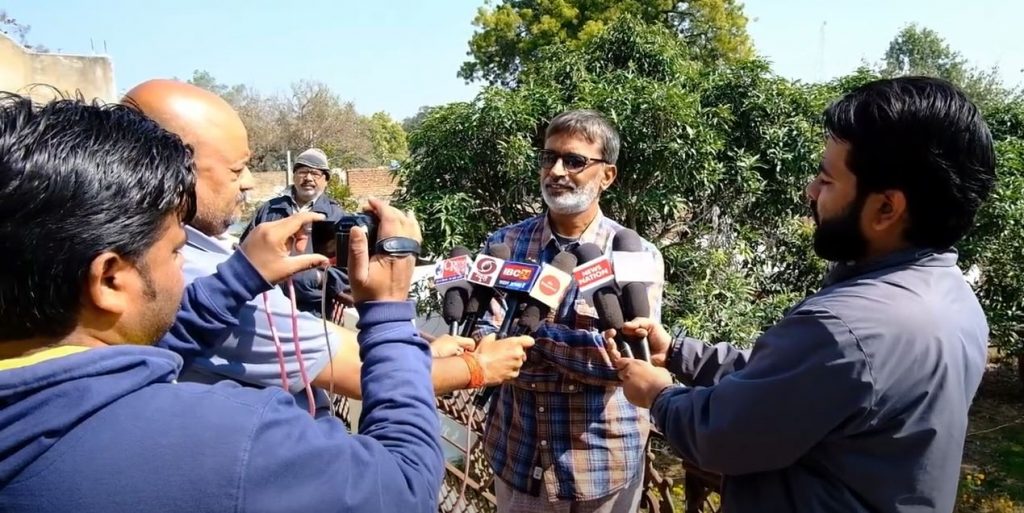 Patangarh is an amazing, peaceful Gond village, in East Madhya Pradesh, near the border with Chattisgarh . Life here seems to go simply with the rhythm of the sun, the moon, the seasons, and the crows of the roosters. There is electricity in the village but no running water, and every morning people meet at the water tank to fill the pots for their daily needs. 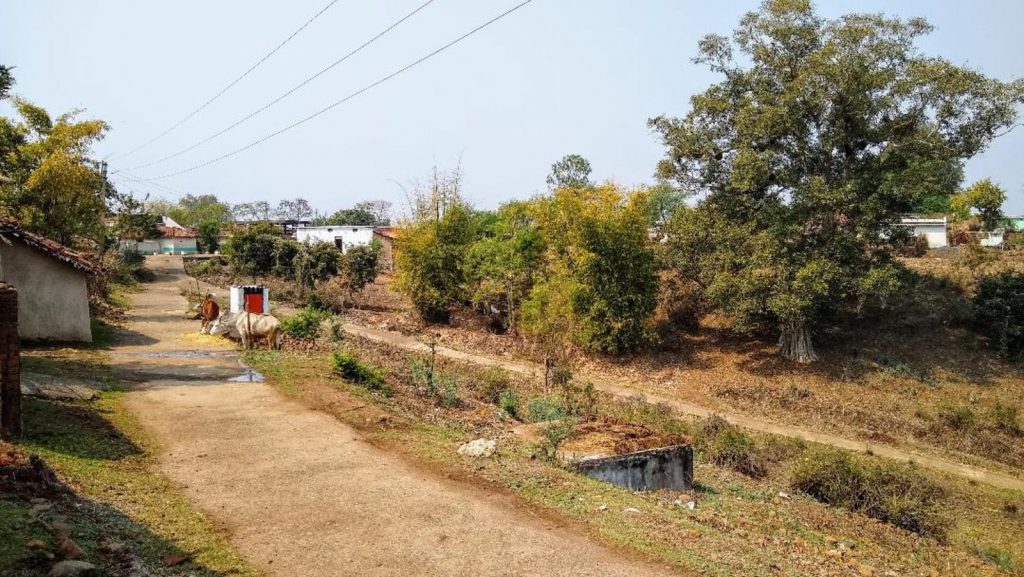 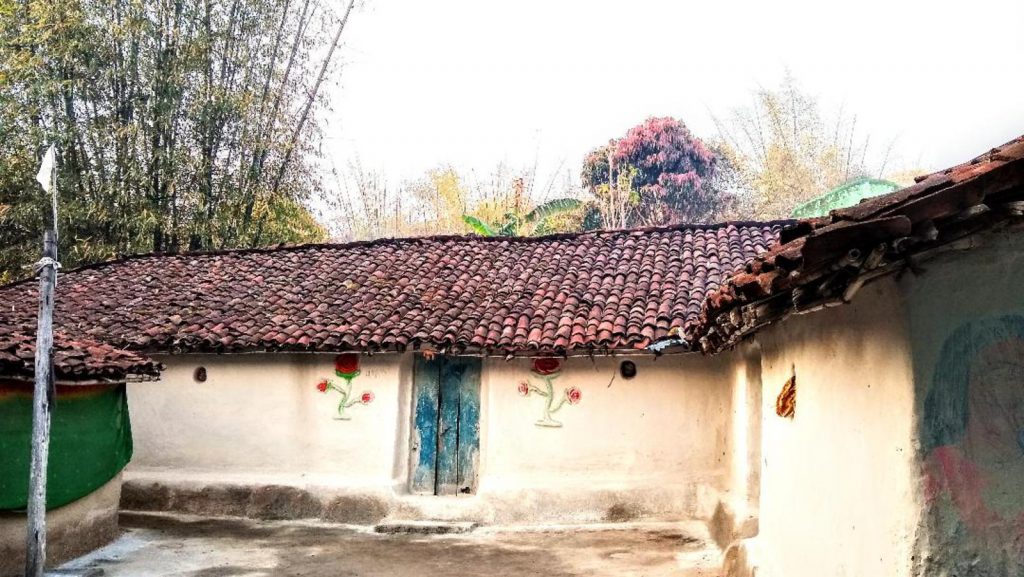 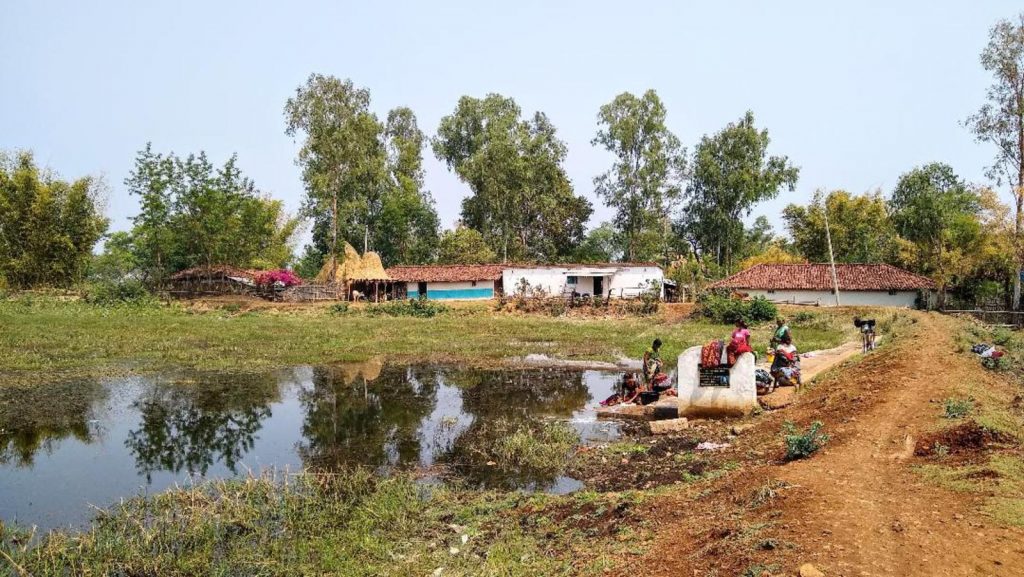 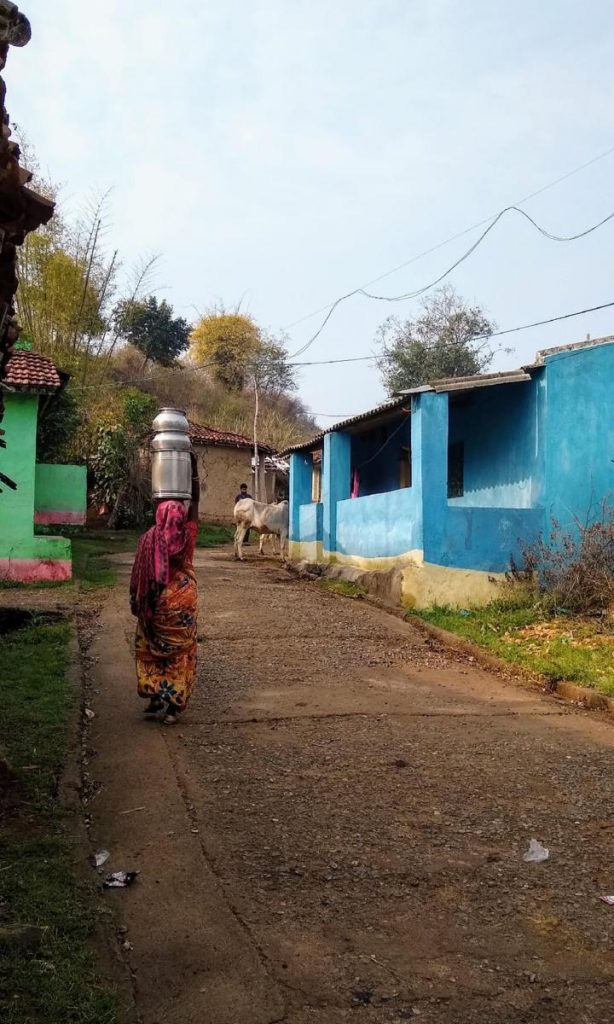 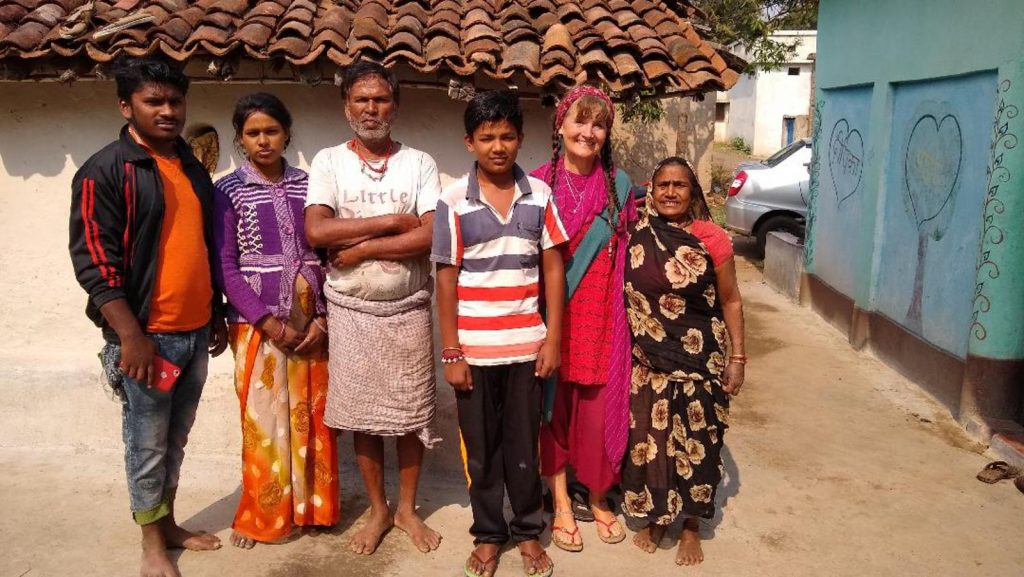 The most extraordinary thing about this village is that (almost) every inhabitant is a skilled artist. I had the privilege to see hundreds of paintings and other art productions, all incredibly beautiful and touching. 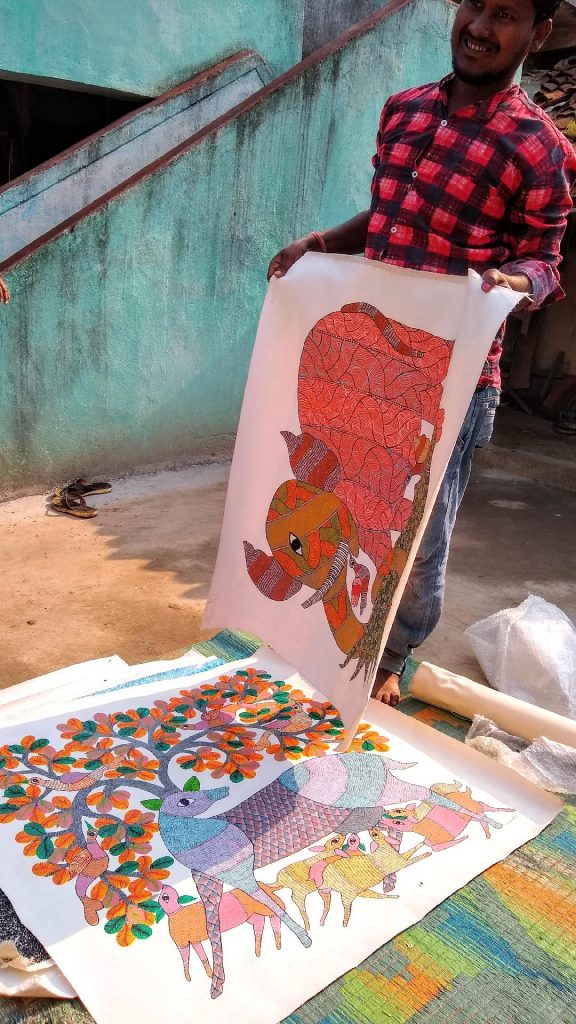 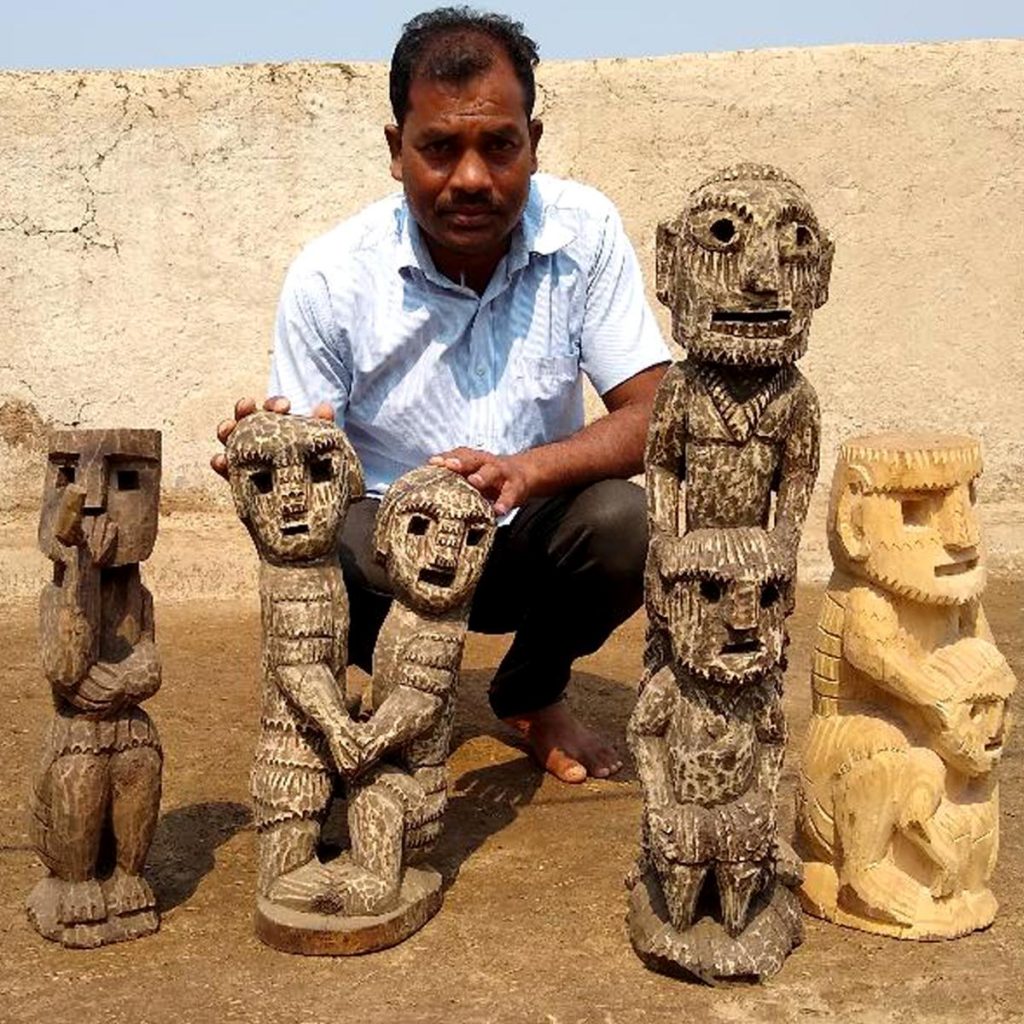 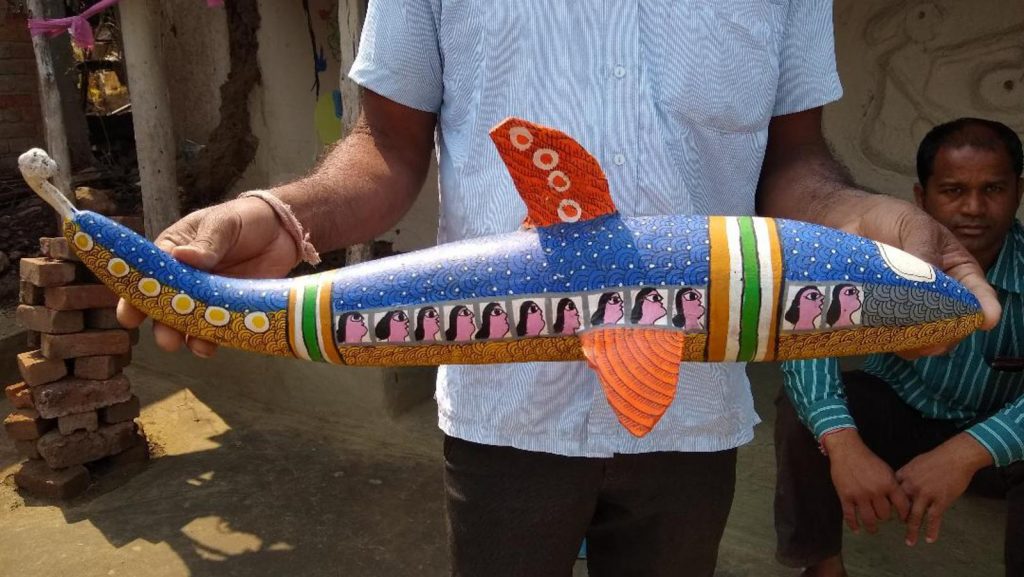 I always thought that the Irish village of my home, Allihies, hosted an impressive amount of artists, but we are far behind Patangarh!

Still – I couldn’t help thinking of the similarities – Allihies and Patangarh are both, in their own way, villages of farmers and painters.

About Gond people and their art….

Gond people are one of the largest tribal communities in India. They are predominantly from Madhya Pradesh but also from the surrounding areas. The word “Gond “comes from the Dravidian language, meaning “Green Mountain”.

Traditionally Gond tribes cultivate land, produce crops, and raise livestock. They grow rice, wheat, lentils, sesame and millet. Originally they must have been nomadic hunters and food gatherers, because they retain such a close connection to the forest.

Their houses are made of a mix of mud and cow dung, giving a smooth finish without sharp angles, and decorated with traditional patterns. 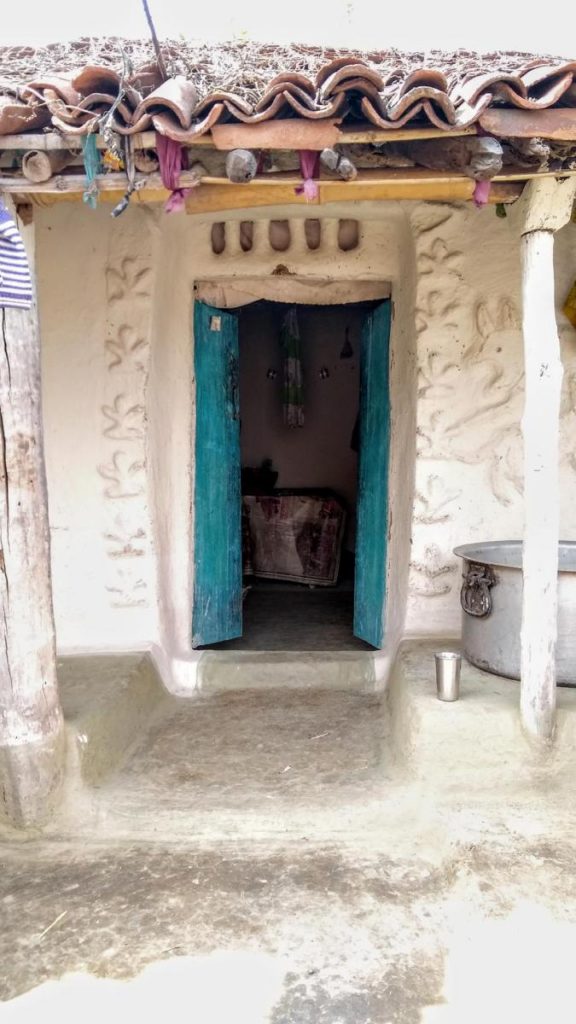 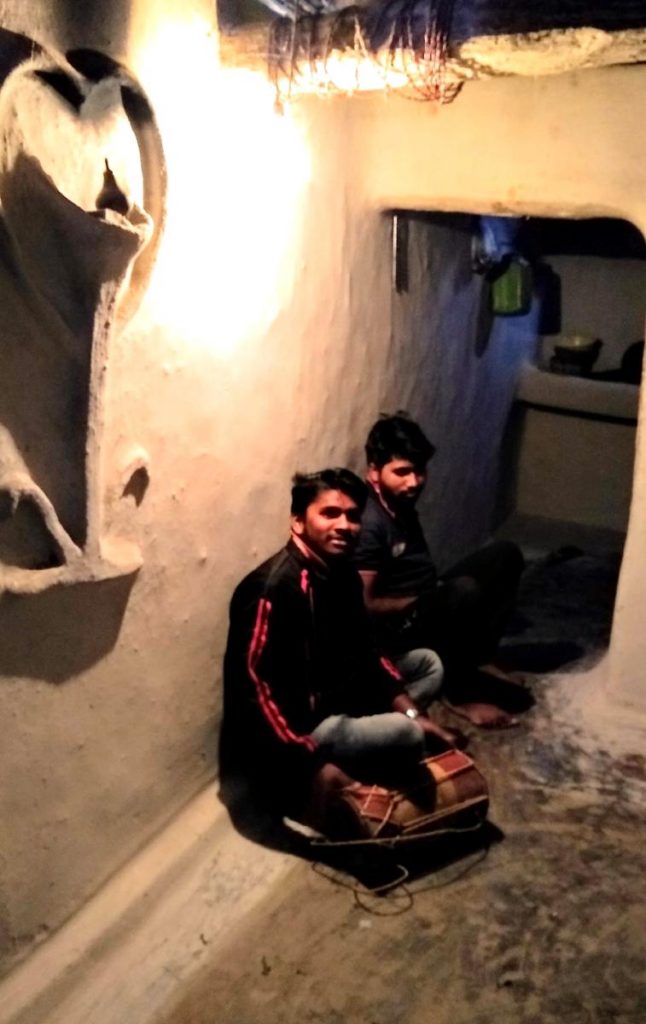 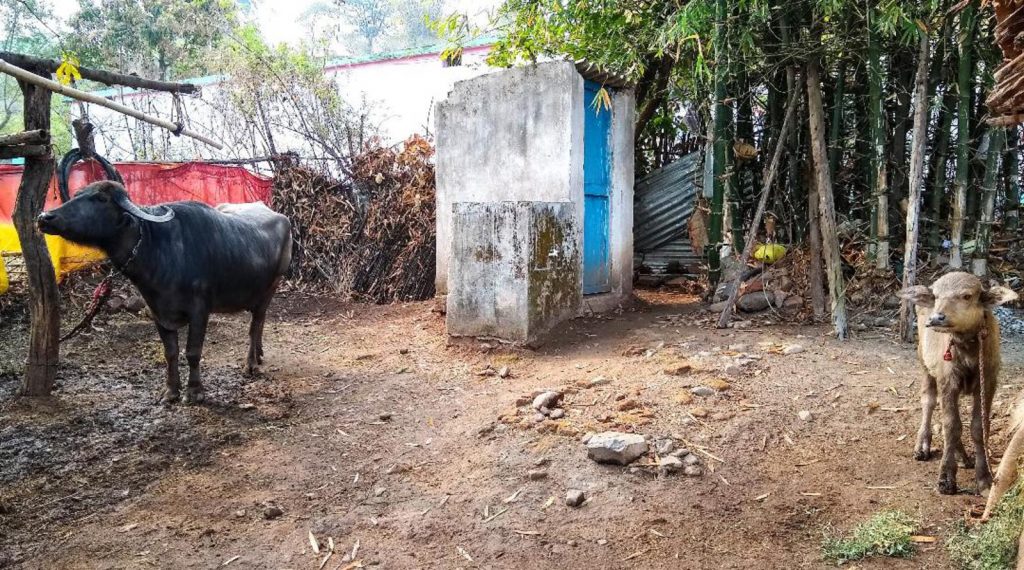 Unlike the Hindus, Gond people eat meat and fish; they also grow tobacco, and for celebrations, they make a traditional alcohol from the Mahua tree.

With a complex mix of Hindu deities and animist beliefs, the Gond people live very close to nature. They believe that mountains, rocks, lakes, rivers, trees and animals are all inhabited by a spirit or life force. Painting nature is their way of showing deities respect.

The Gond folk tradition is rich in arts and crafts, music and dance. Art has always been present as a natural part of their lives and continues to be a way to spread ancestral myths and legends, record the daily life of the tribe, and give respect and honour to their natural surroundings.

I heard it's the poetry day…So enjoy this, like I did a few days ago in a lovely tribal village of Madhya Pradesh, central India.. ❤️?

The Gond people have a belief that seeing a good image brings good luck!

Originally, the Gond people used to paint on the ground (Dinga) and walls (Bhitichitra) of their houses, using natural colours from plants, charcoal, limestone, coloured soils, and cow dung. They also used to tattoo art on their bodies.

Only a few decades ago, Gond artists started to paint on paper and canvas, using acrylic paints. (I will explain how this happened in the last part of this post).

Whatever support, pigments or medium they use, Gond artists all share a common style which is rooted in their folk tales and culture. Their traditional intricate patterns of lines and dots bring their subjects alive with an incredible movement and dynamic presence. The lines are all curving and moving like snakes and, with a vivid sense of detail, the repetitive patterns and the bright colours make each piece of art unique.

There is a story behind every painting, and through the vibrant game of colours and dots you can feel abstract concepts like emotions, dreams, mystery, humour and imagination dancing along with the rhythm of life.

Contemporary Gond artists are determined to preserve their artistic traditions that depict nature, life, and mystic stories. Nowadays, as the ancient and the modern world coexists alongside one another, sometimes, a plane, train or phone also appear in the paintings. 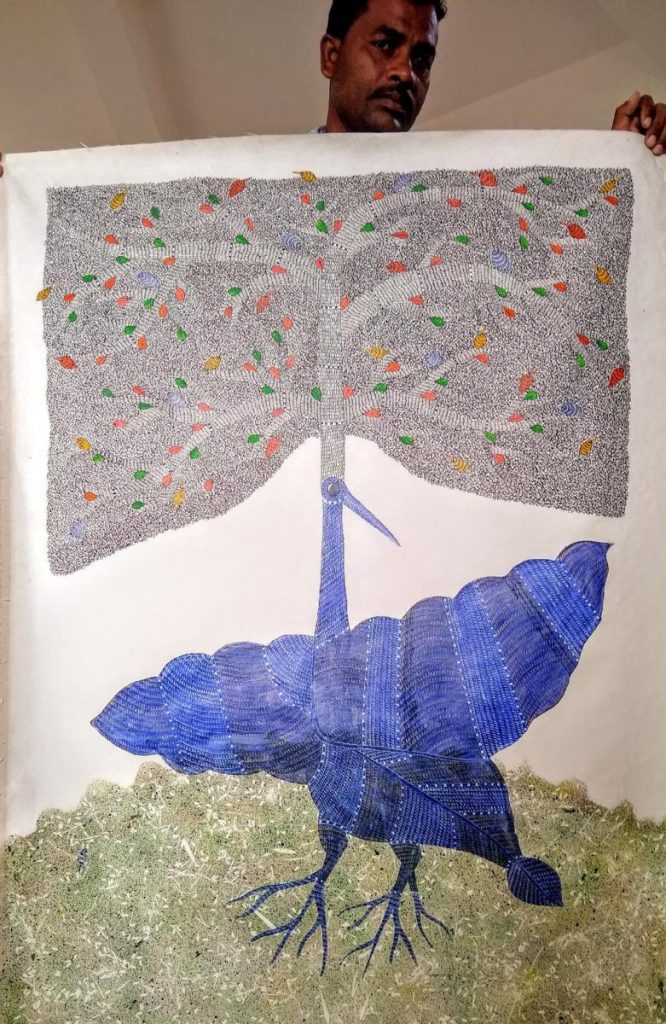 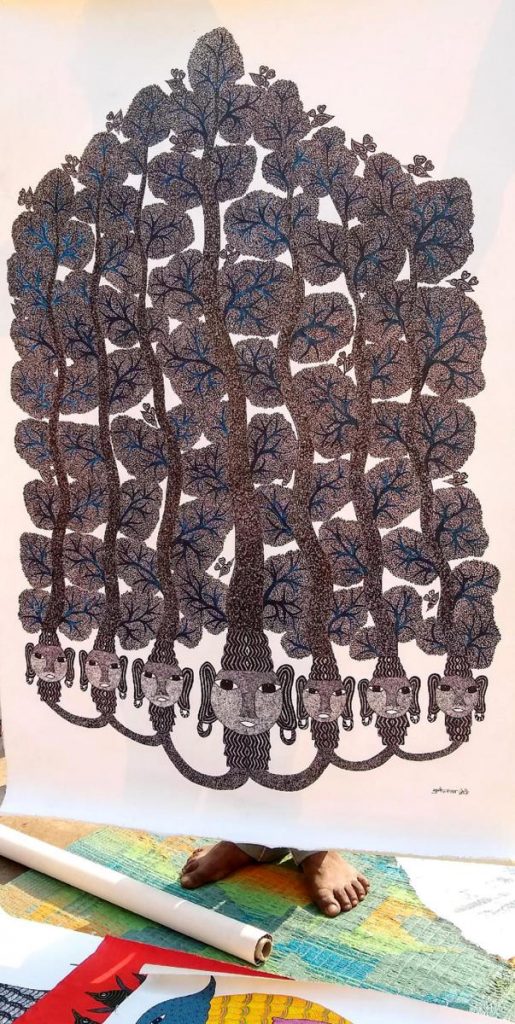 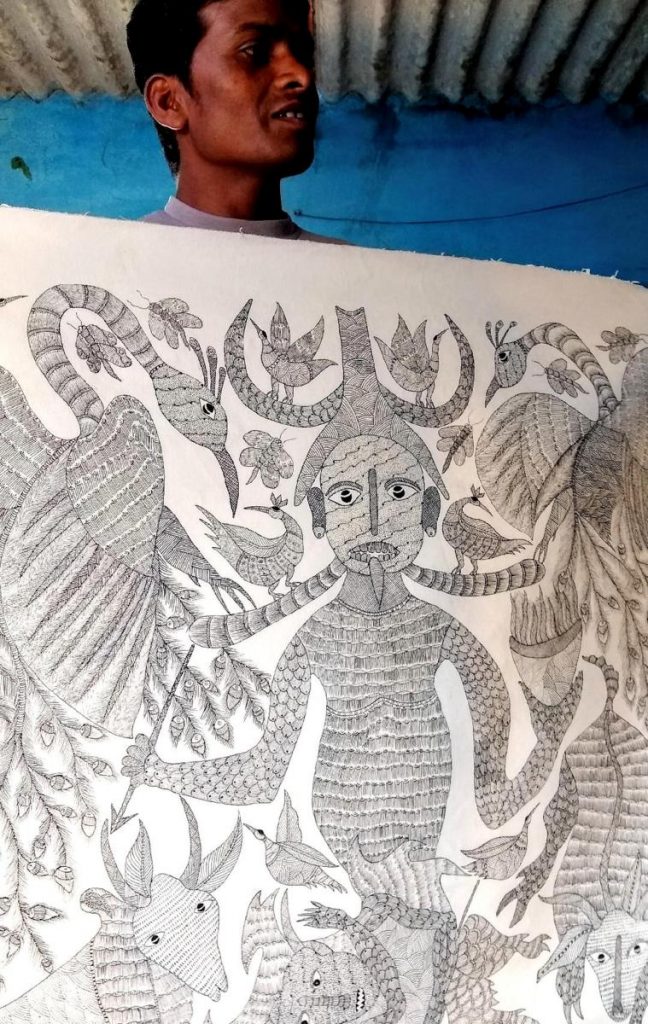 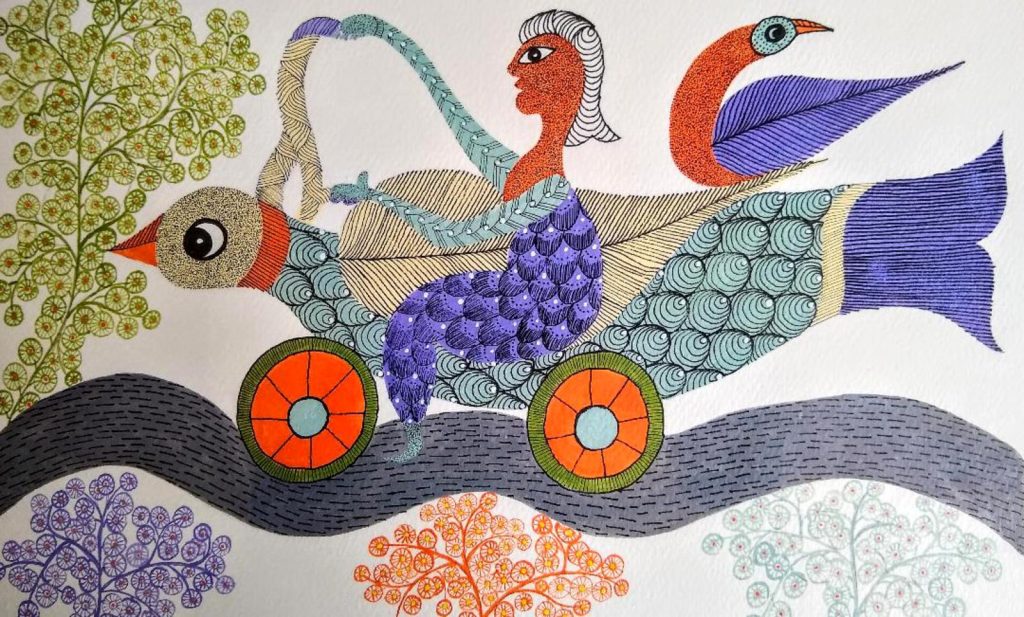 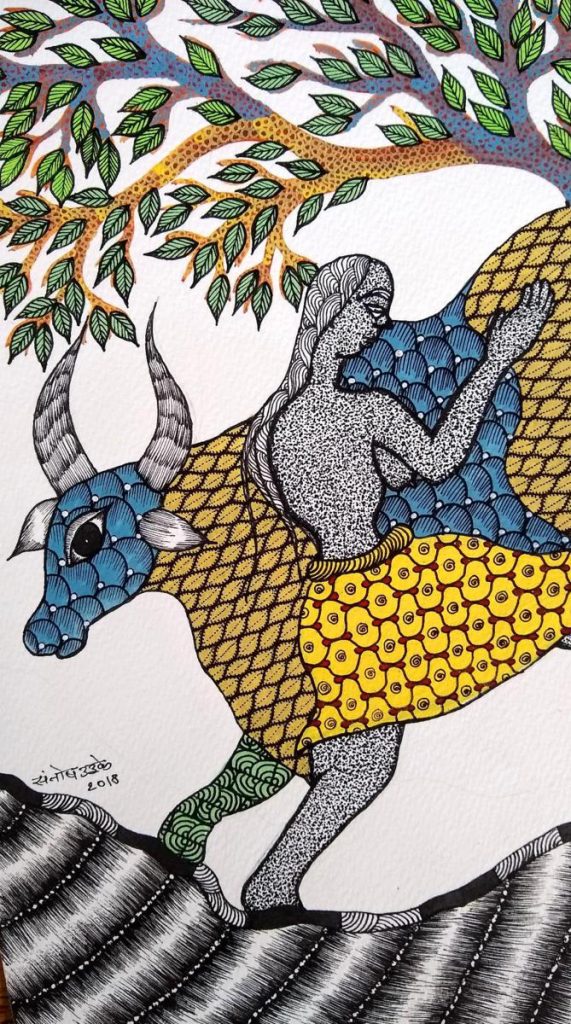 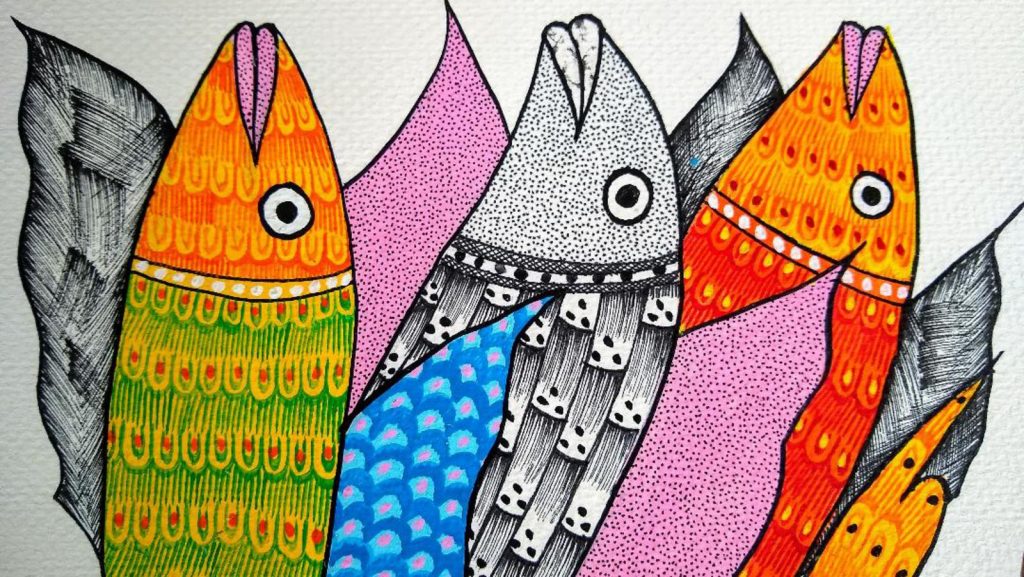 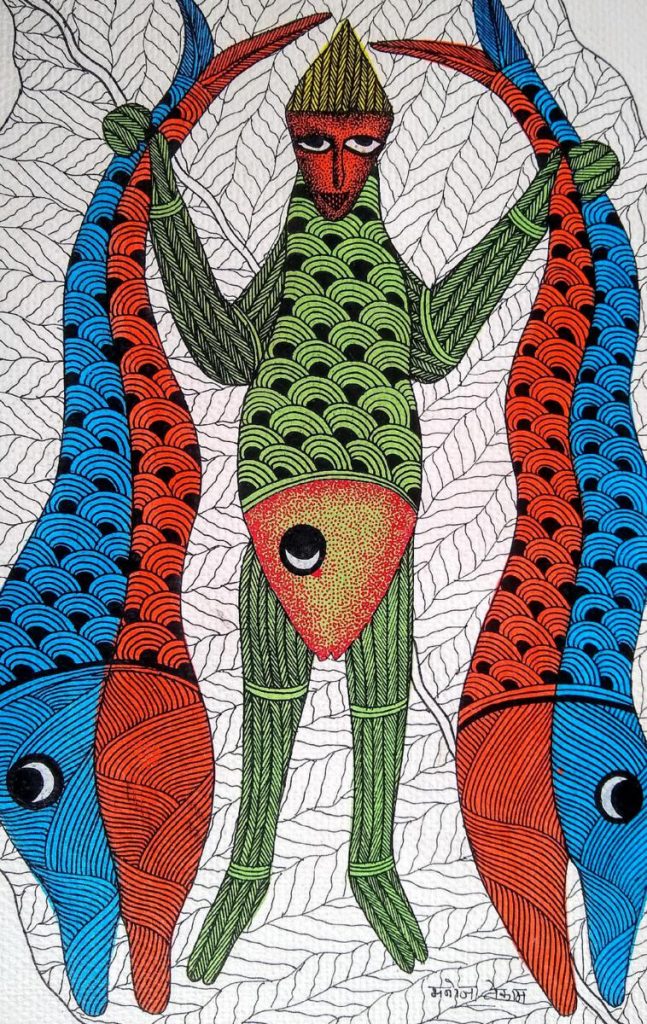 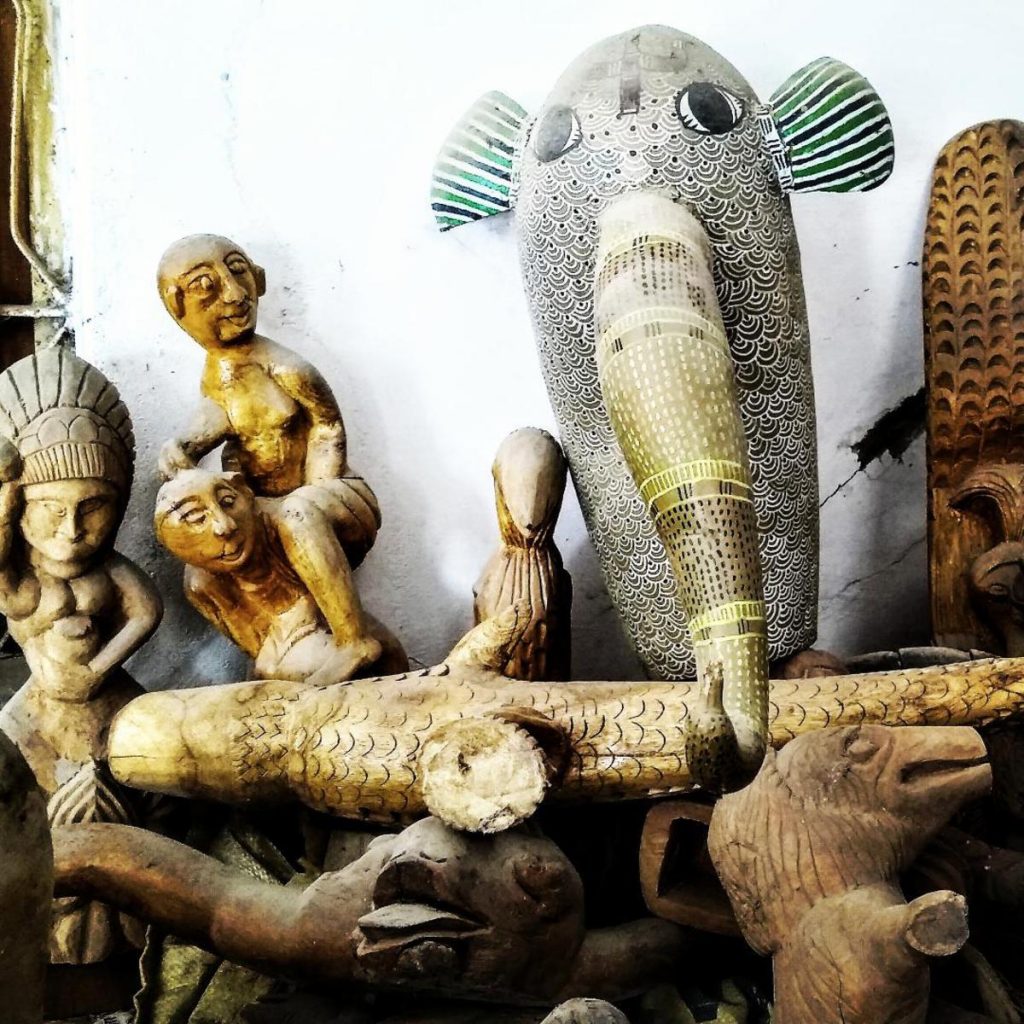 The story behind Patangarh, canvas and paper…

In 1981, a new cultural centre, Bharat Bhavan, was built in Bhopal, the capital city of Madhya Pradesh. The man in charge wanted to exhibit tribal art alongside modern art. His searches took him to this small tribal village of Patangarh, where he met a very talented young artist, Jangarh Singh Shyam.

Soon, with the support of Bharat Bhavan, Jangarh moved to the city and started to experiment his art on canvas and paper. Only a few years later he was recognised in the art world all over India, and later, internationally, especially in Japan.

Jangarh Singh Shyam is since considered the father of Gond painting, as he introduced it to the rest of the world through the use of paper, canvas and acrylics. He has even had his statue erected in Patangarh… 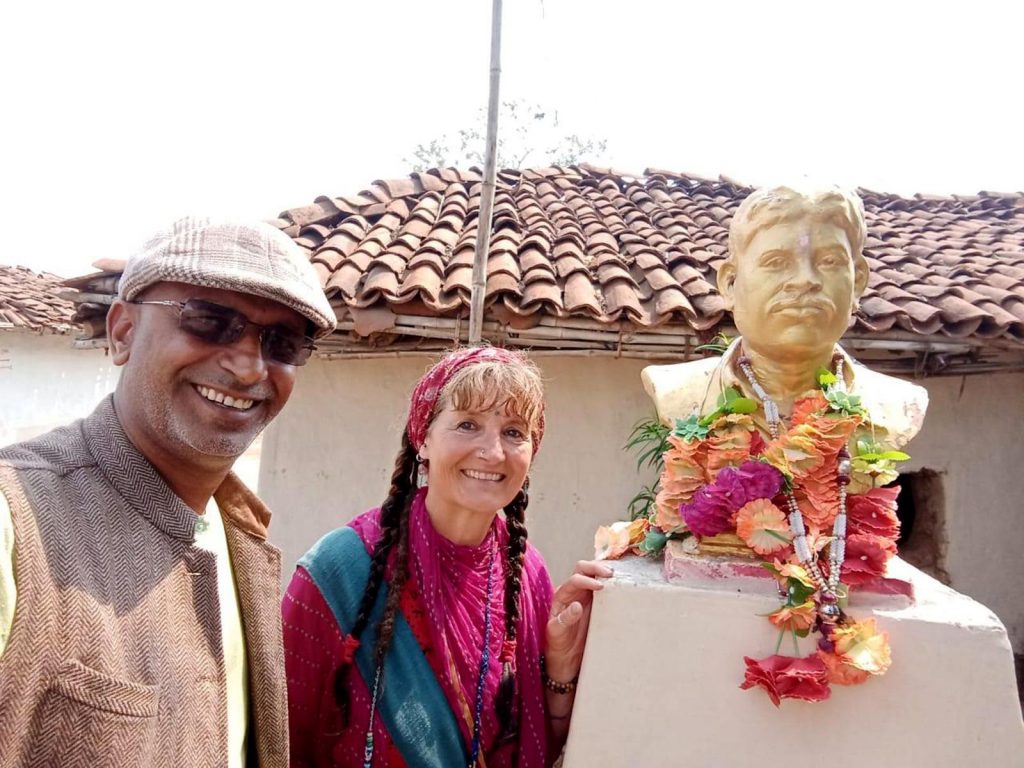 His success has been an inspiration to other skilled artists not only in his own family, but to the village as a whole, who have since started to paint on canvas and paper and sell their work. Some families moved to the city, the luckiest of whom have made a living of their talent. But unfortunately, many of the village artists are struggling to survive, especially since the government “Tribal Co-operative Marketing Development Federation of India (TRIFED)” stopped buying their productions, about 4 years ago.

The story of Jangarh Singh Shyam ended tragically, with his death in Japan in 2001. He was only 39. The circumstances of his death remain obscure, but the rumours say that the artist was depressed and exploited. He was missing his family and community, and under huge pressure to produce more art than his inspiration could manage.

My stay amongst the Gond left me with a profound feeling of admiration and connection with these people. I felt incredibly welcomed everywhere and, despite the lack of language, I could feel a genuine sense of connectedness, hospitality and sharing.

Like them, I also feel a strong connection with nature, and coming from the western world, their simple village life was a great inspiration to me.

In Patangarh I met a lot of artists, and saw literally hundreds of paintings. Each of these paintings spoke to me in a very special way, and I was feeling very sorry for not being able to buy them all!

Eventually, I bought about fifty pieces that my heart chose, and slowly, without even thinking, a project materialized in my mind.

They need to sell their art since the Indian government has stopped buying it.

I can share these beautiful works of art, and hopefully, help the villagers sell their work by finding art lovers.

And so I am planning to do a public exhibition here in Ireland, together with talks on Patangarh the Gond artists village.

This is a call for art and nature lovers to help my cause!…

That Patangarh people can continue their peaceful village life and keep their culture alive by continuing to create art in their own environment, without having to move away from their lovely nature and life style.

A few clips of film from my search for Gond Art in India… ?❤️.